And what have I learned? Mainly that cliches are true for a reason: Britain is a fabulously beautiful and diverse country with friendly people; sailing does teach you both patience and urgency, and is both easier and harder than you think; sabbaticals do you good.

Would I do it again? 100% and would recommend to anyone. So many sights, sounds, tastes and many, many laughs. Other adventures are in store ………

Sail – (not just where it was – honest!) from Arbroath to Dundee. Wind pushed us south to the mouth of the Tay estuary then helpfully changed direction a little to guide us up the river, all with a steady healthy breeze. And then the sun came out ☀️

Sailing Area – by a country (nautical?) mile, the West coast of Scotland.

Funniest exchange – Al : “what’s that light there?” Smartypants Ellis: “that’s an eastern cardinal, flashes three times and is coloured black / yellow / black, occasionally has a bell” Al : “I meant the light on the stereo”

Most inept sailing moment (there were many) – 3 different suggestions, all wrong, to Skip as to how to leave Bangor marina; inability to actually throw overboard a Man Over Board

Meal Ashore – Seafood at Loch Shieldaig, and The Fishouse in Oban.

Meal Aboard – Prawns direct from the fishing boat in Mallaig, and Paul’s roast chicken off the Fife coast.

Cooking ingredient – Thai chilli spices blagged by Barrie in Inverness after chatting up the waitresses.

Stopped by the sea school office to pick up my new course completion  certificate – sure they gave it just to get rid of me. 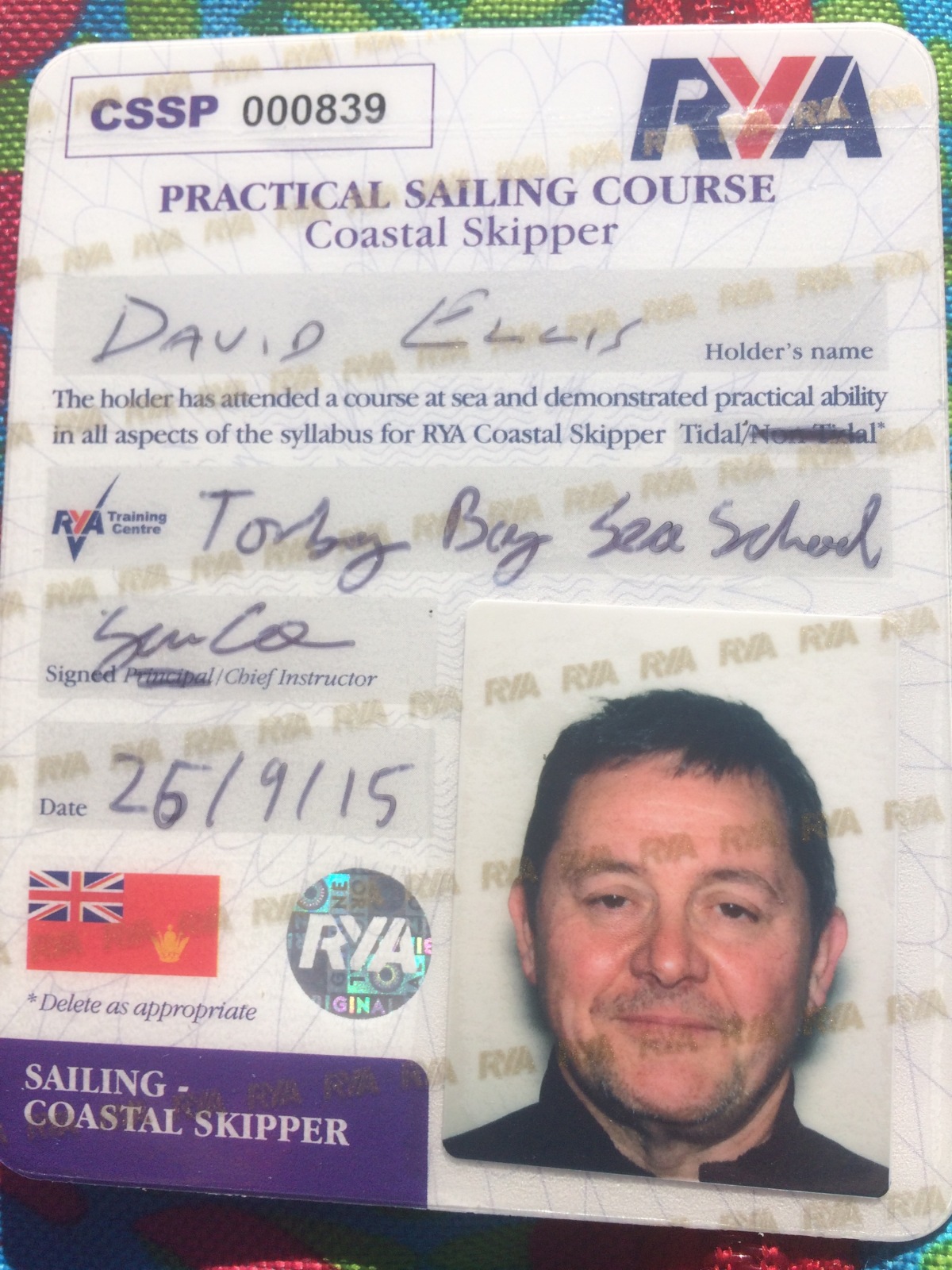 Much better news is that Rob was awarded his Day Skipper ticket too!! (Day Skip is a big deal as it allows you to charter) Proud Dad ❤️ and big thanks to Phil for terrific coaching. 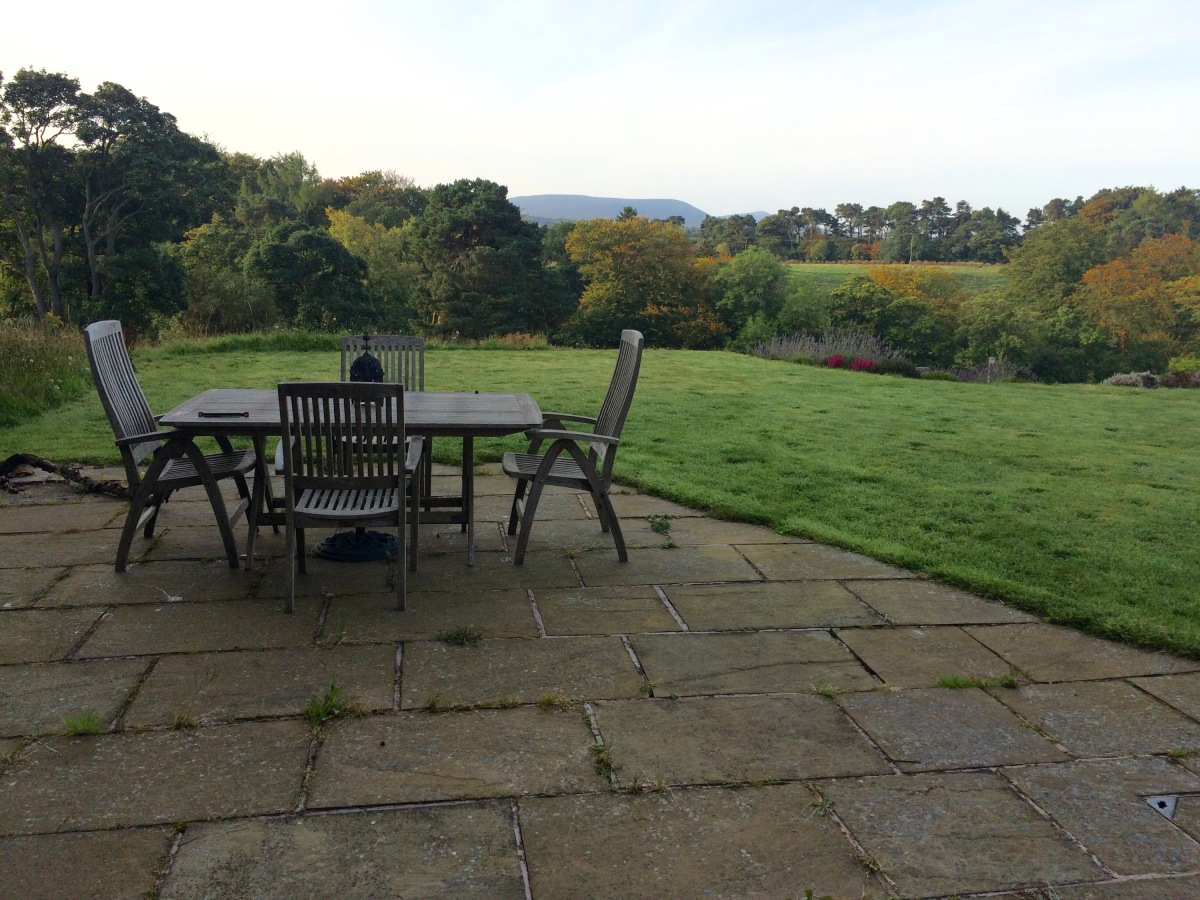 Overall reflections of the whole trip in a couple of days once I’ve dried out.🍺🍷🍻🍹🍸 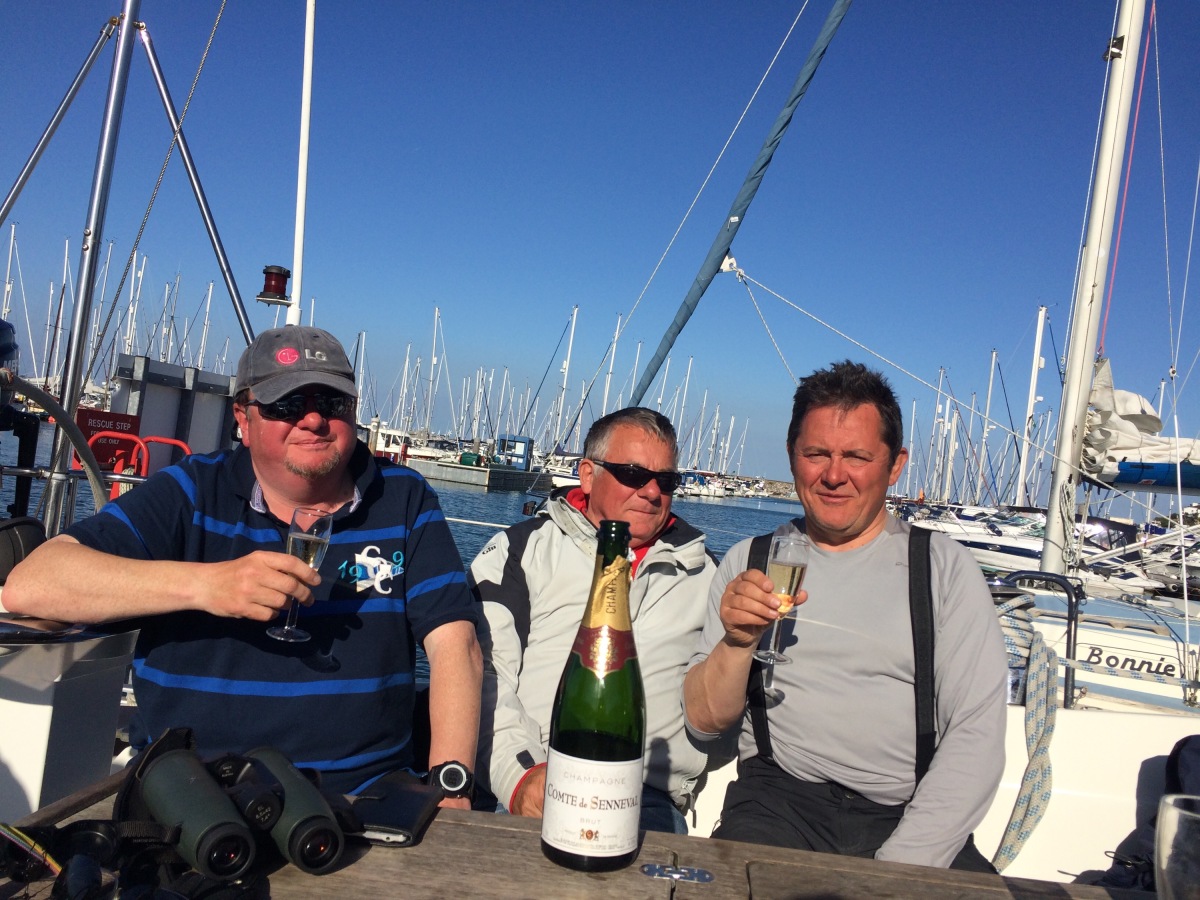 Cheers Uncle Jim !!  Our memorable voyage comes to an end with a sun drenched sail in perfect winds.  A short passage enjoying the Devon coast.

Rob in command – strangely, he seems to enjoy ordering his old man about – as he leads the final leg to the school’s home port.

We finished as we started in ineptitude.  Highlight being  spectacularly incompetent MOB exercises (Man over Board) where we both ran the MOB over and on one occasion failed to actually throw him overboard.  The (in) competent crew to the end❤️ 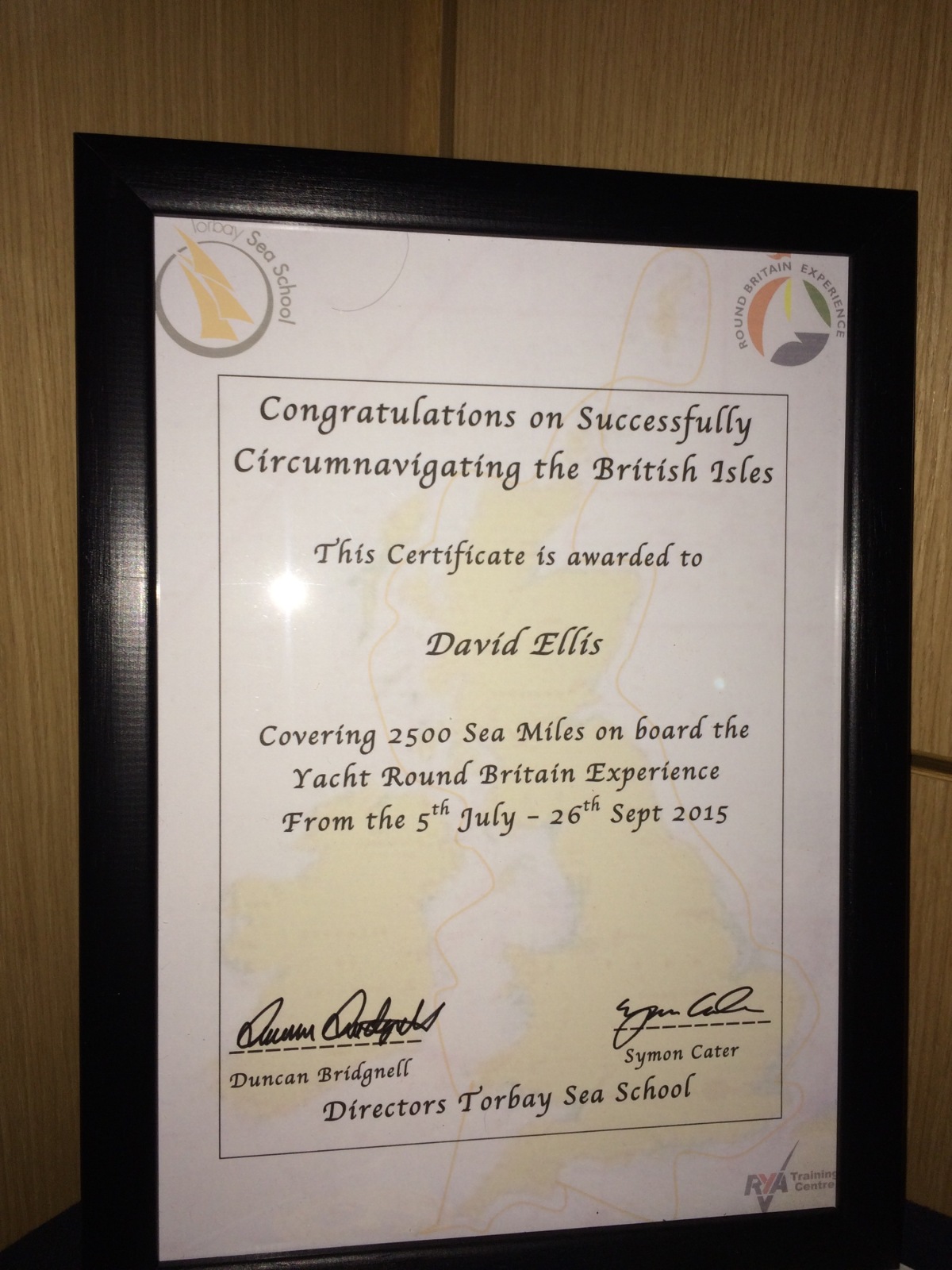 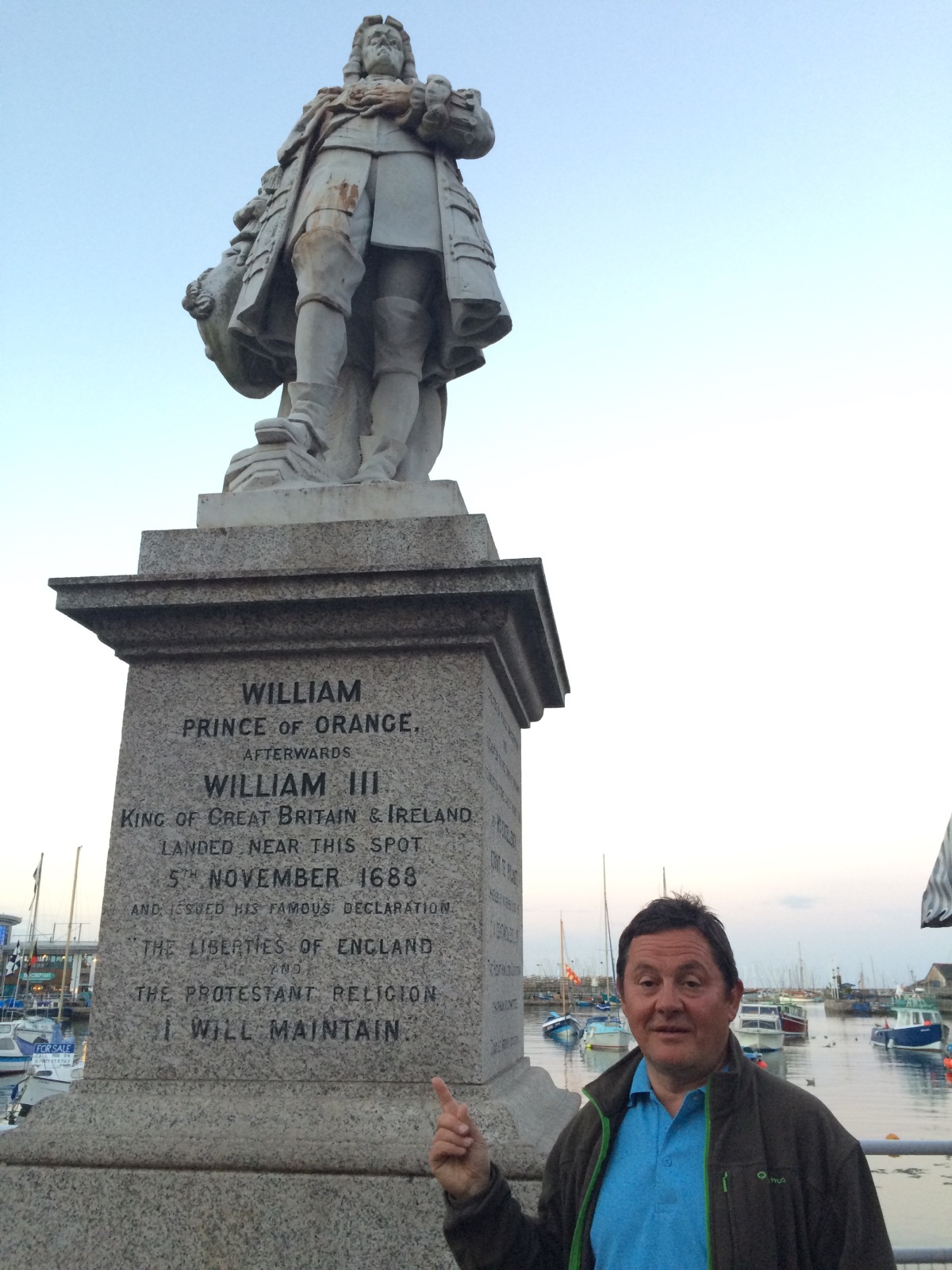 Dinner at the yacht club and one or two refreshments 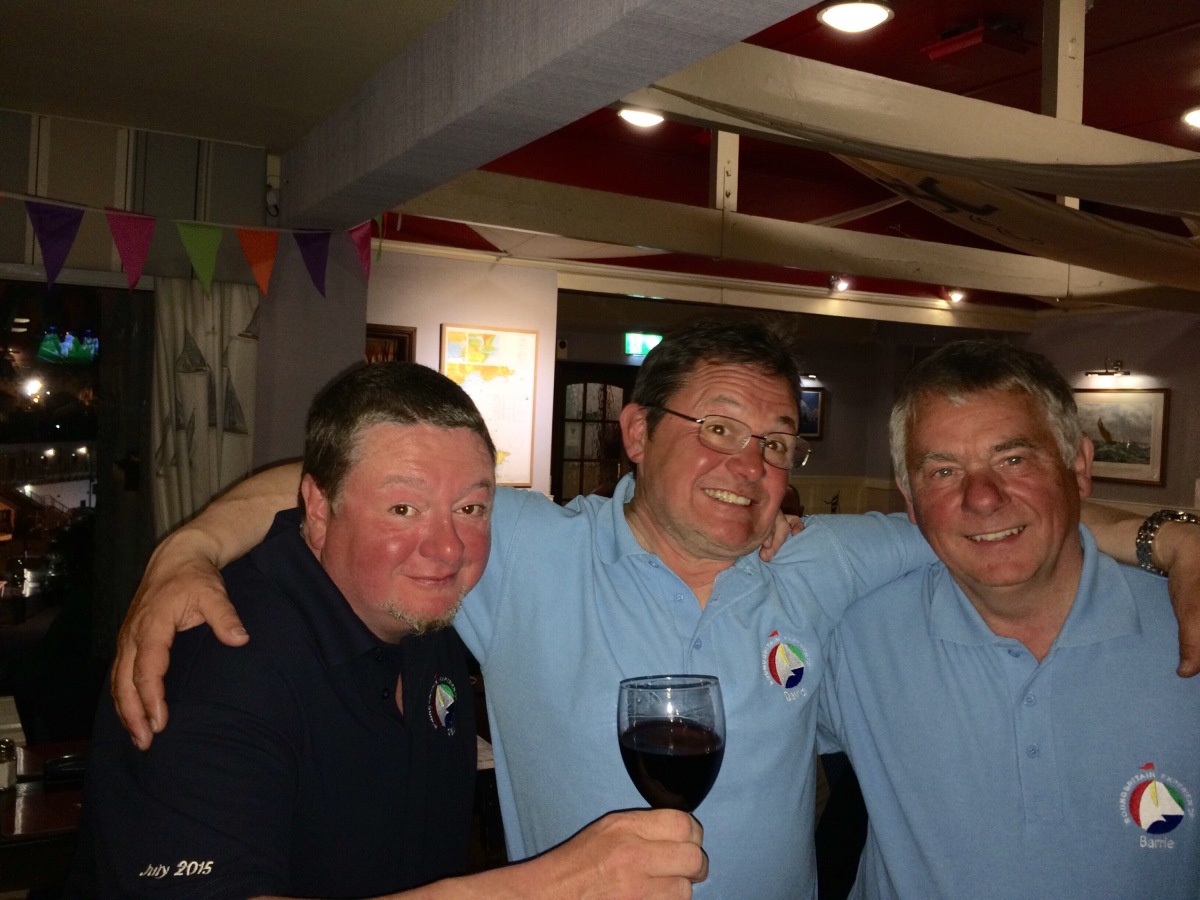 And a final pic for our empties followers 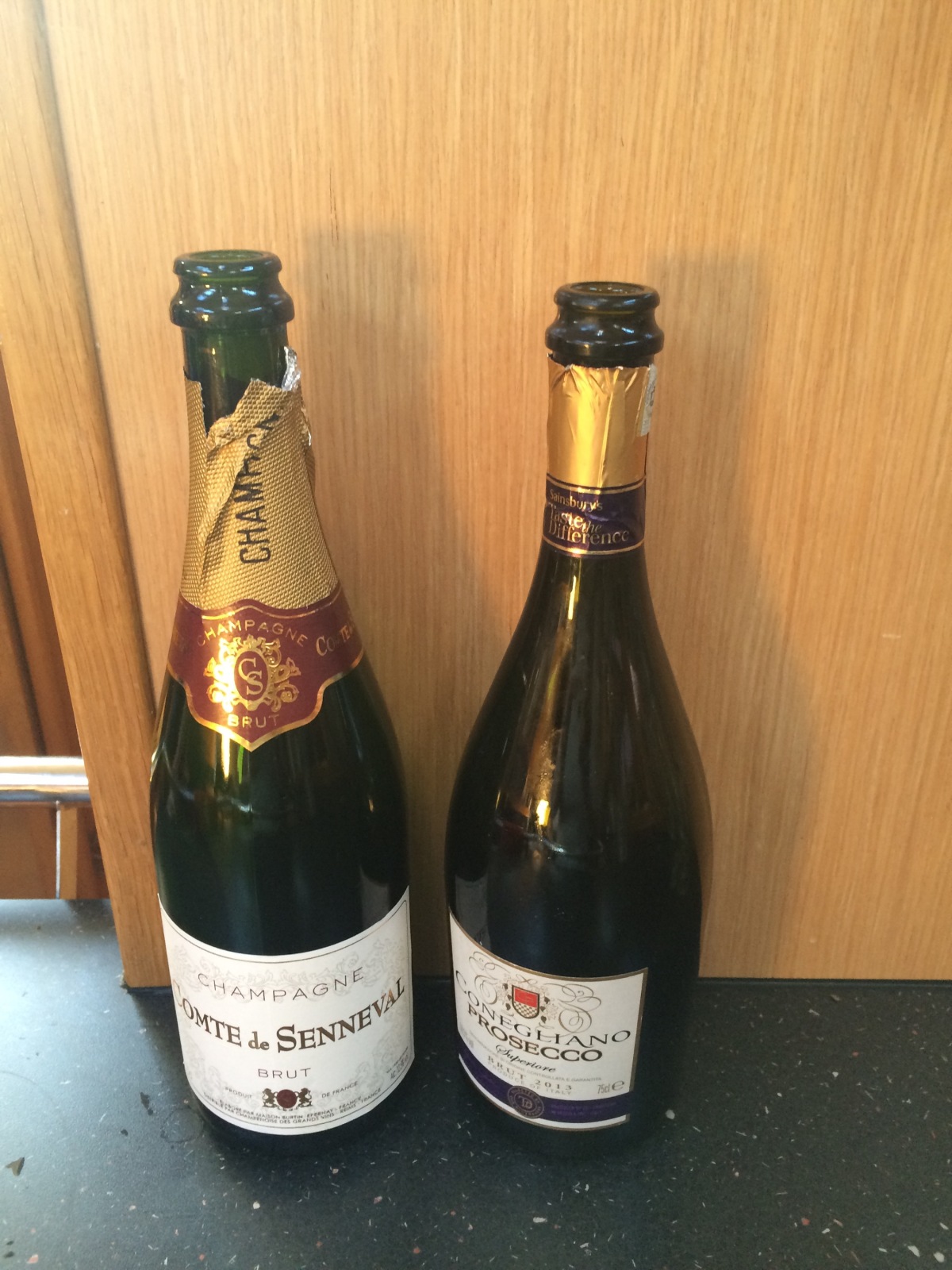 Another early start as we set off to return to the UK mainland by crossing the English Channel.  Another sea sunrise 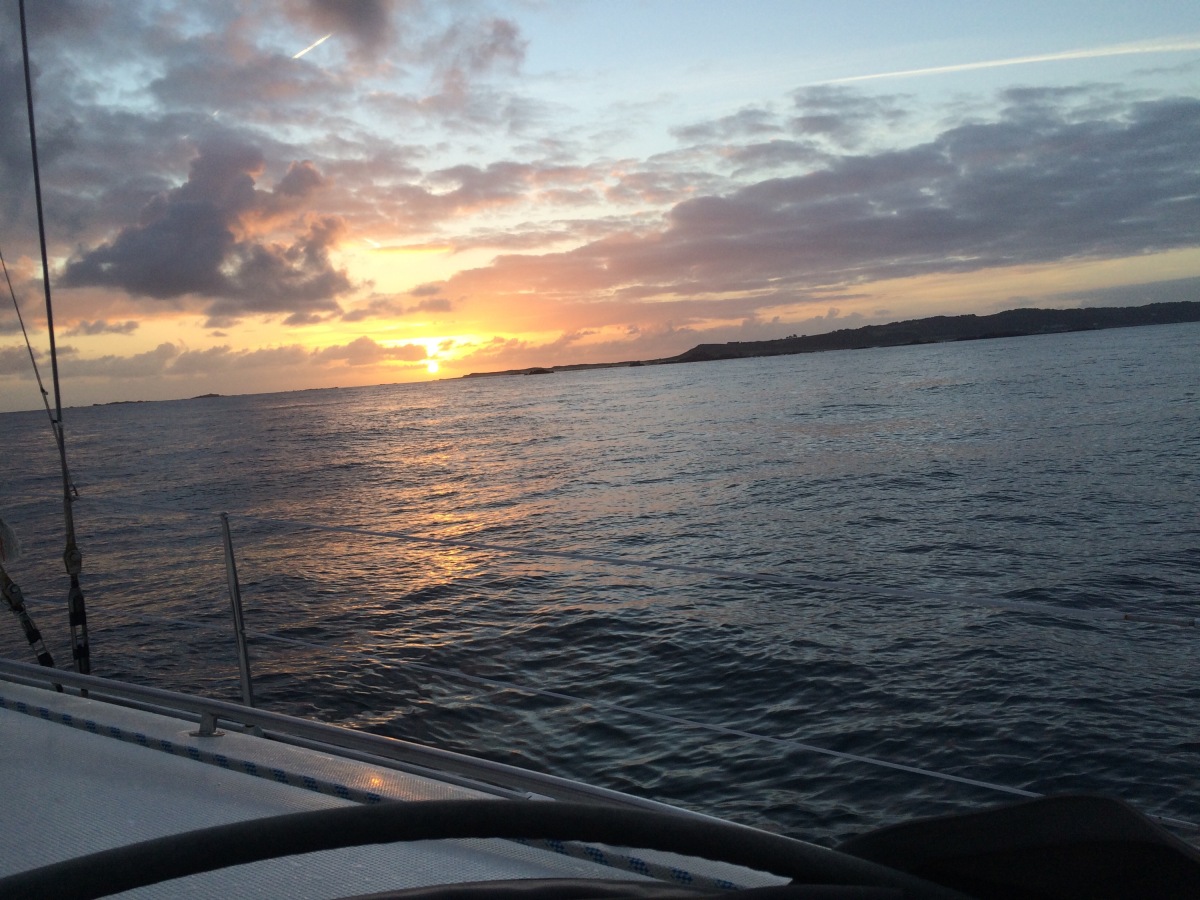 There’s 2 main shipping lanes – one for each direction – both about 5 miles wide. Eyes peeled as we don’t want any up close and personal encounters with anything large and heavy. Like a tanker.  What looks like loads of space closes alarmingly quickly and manoeuvrability is limited but all is well. 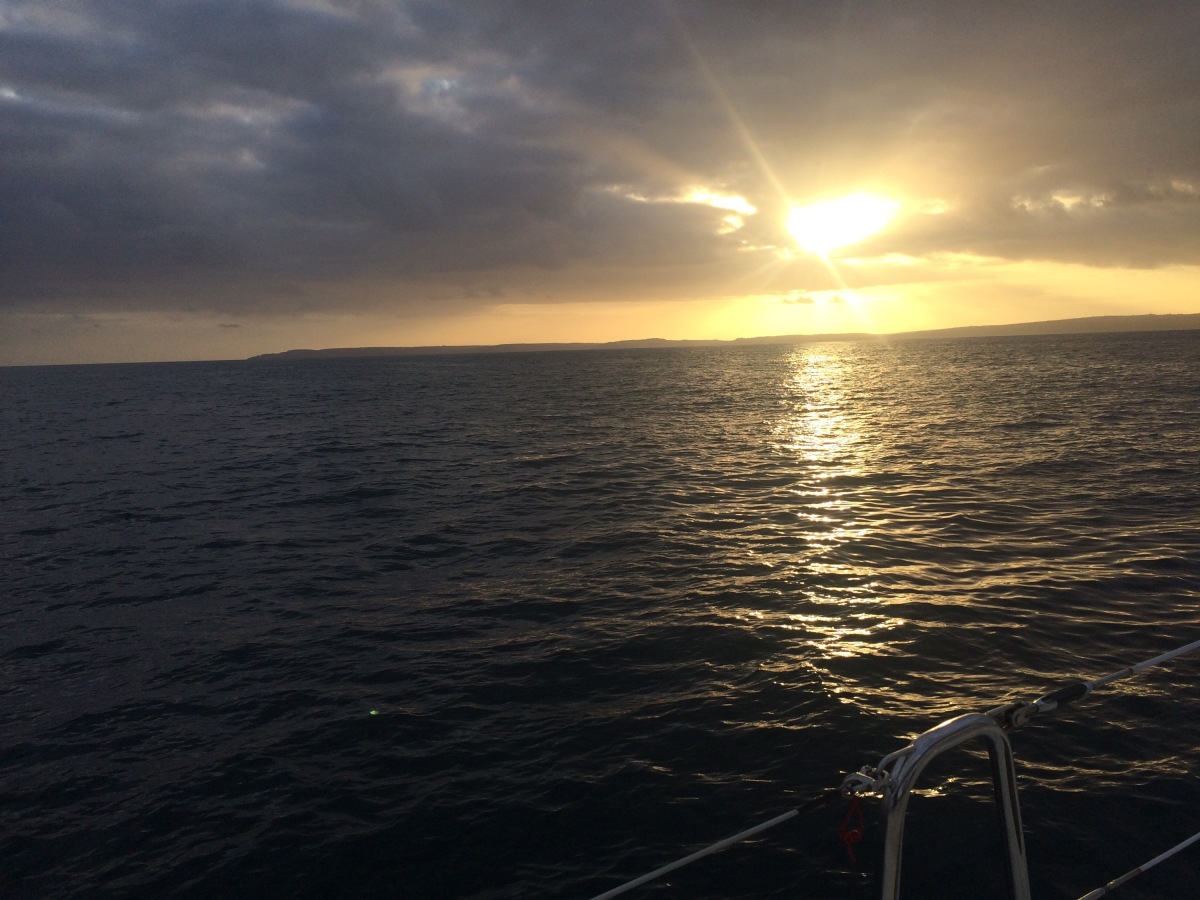 Then into the river Dart and onto very pretty Dartmouth. Lots of Harry Potteresque houses. 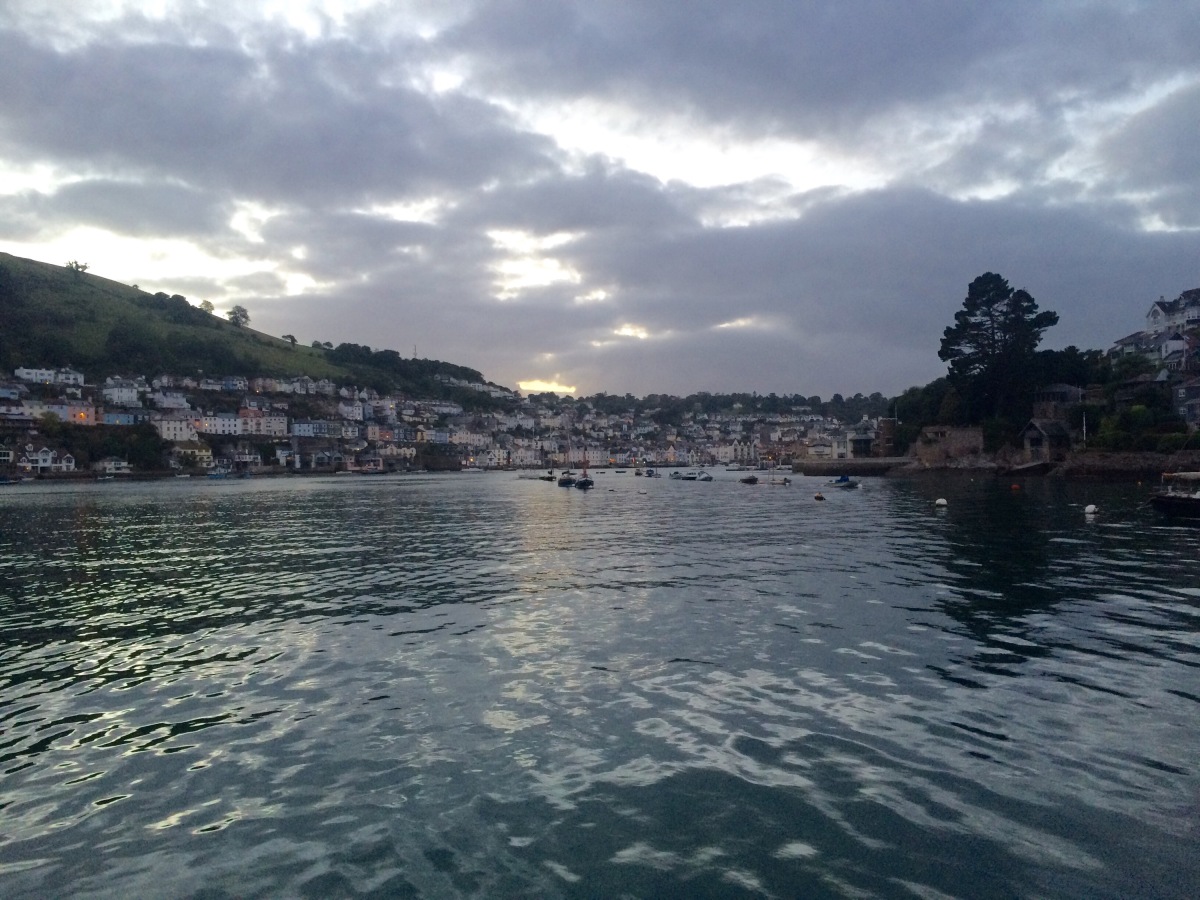 Ashore for a final dinner with Phil.  I think the trip has been too much for Rob. Not sure how much of him we’ll be able to return to his mother 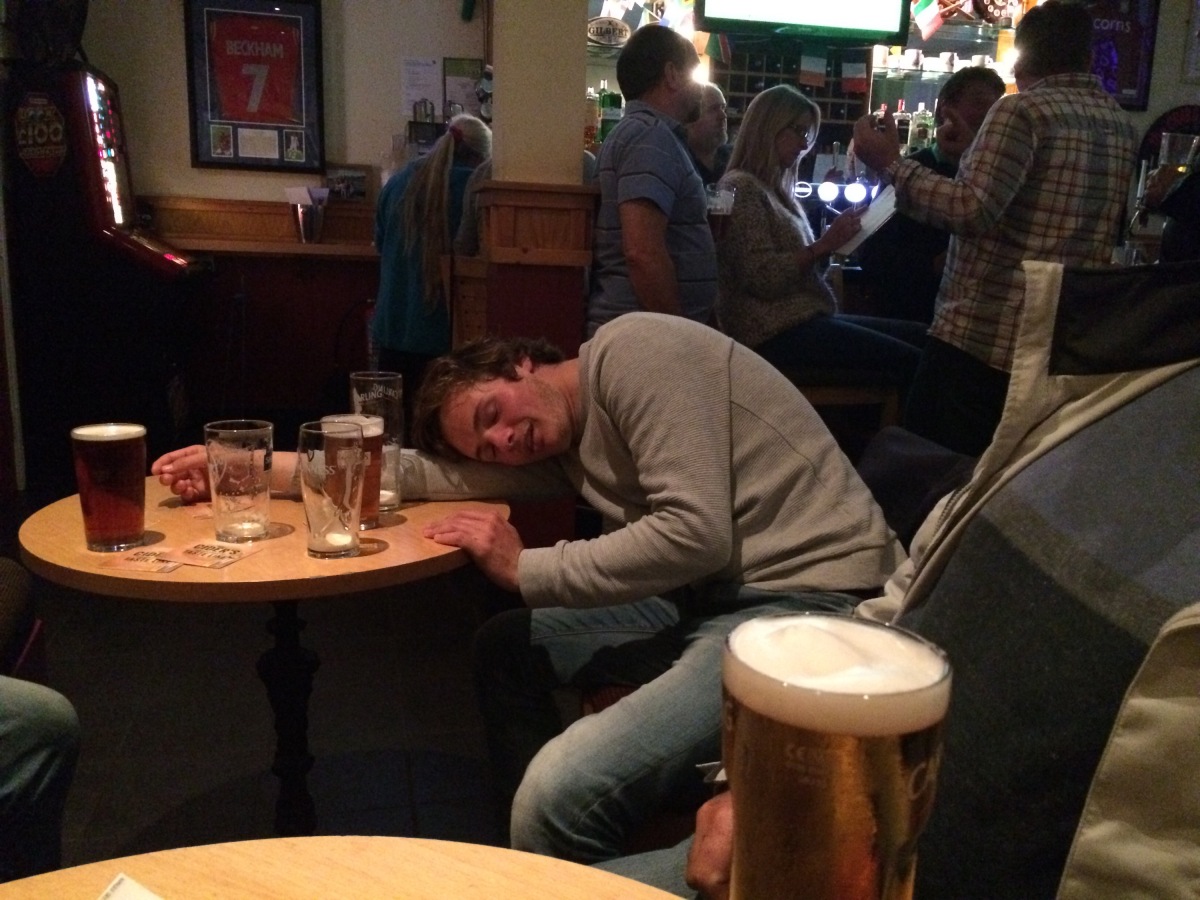 Up early after an early night so shower, proper coffee in town 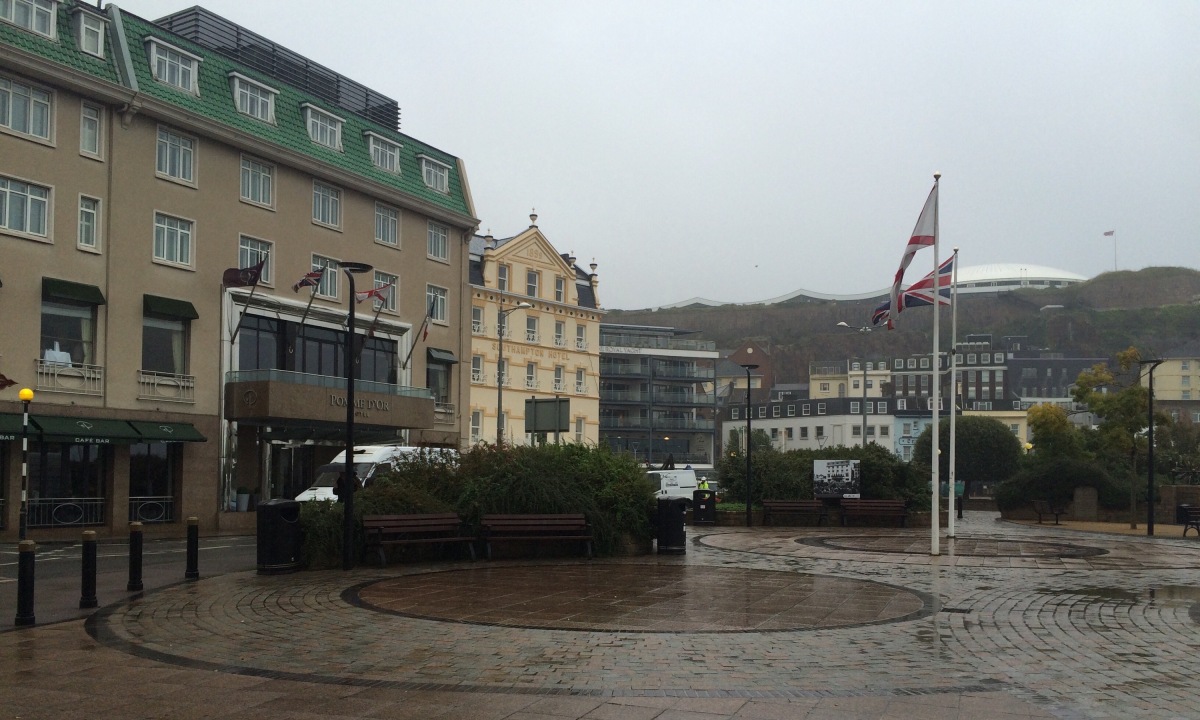 (Liberation Place – occupation in WW2 was a big deal and the histories make the blood chill) and a little walk before slipping at 10.30 for the return trip to Guernsey. Sadly, I was Skipper again due to crew incapacity i.e. hangovers🍻😳

Weather forecast was poor so pleasantly surprised by a lovely sail northward back to Guernsey. 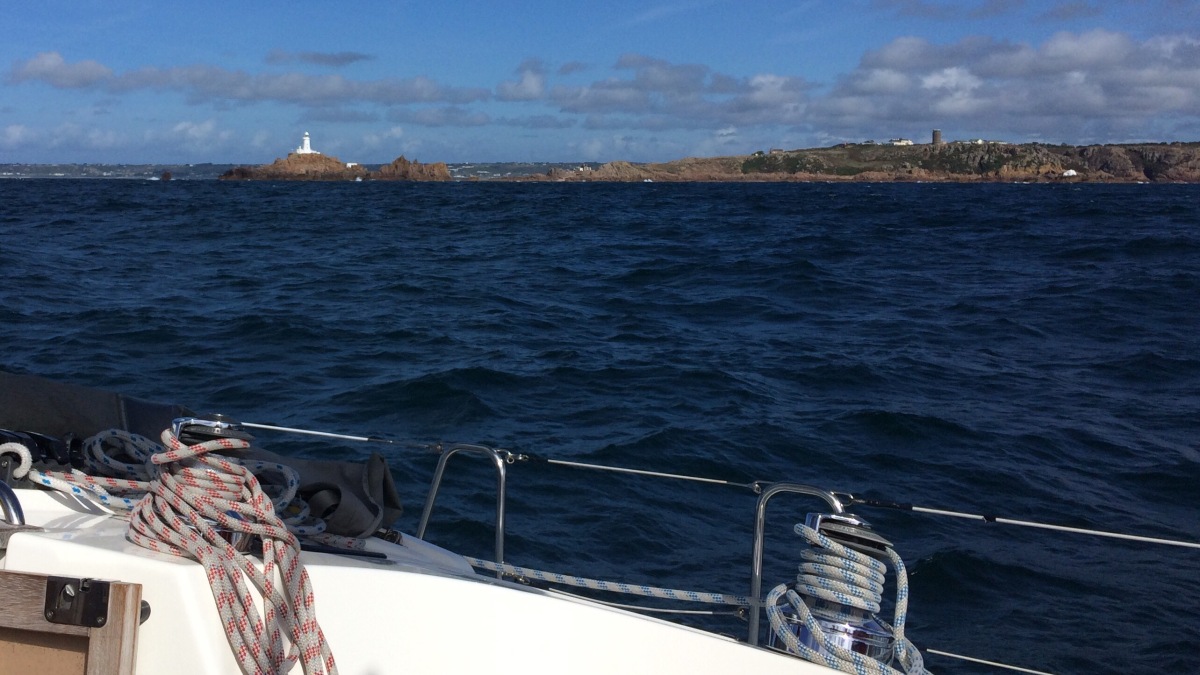 Rob and I crew for a spell together – fun (and no fights!)

This is the only time in the whole trip where we have returned to a familiar port – much easier!

Take the short passage to Jersey under Rob’s skipperage.  The routine is all very familiar now so water and fuel onboarded and boat made ready  quite rapidly.   Witnessed a little 25 footer come alongside the fuel berth and gently pick up his crew without stopping. Impressive and all under control.

Rob’s passage planning was perfect so we zipped over at 6.5+ knots aided by favourable tide. Sun cam out and Jersey looked like holiday destination with beaches and sand

Berthed quite early – 1.30 or so – and after a beans on toast lunch, Rob and I caught Scotland’s win over Japan at the Rugby World Cup at a downtown pub (no beer for us!!)

St Helier is busier and more modern than St Peter Port on Guernsey and is clearly an affluent, commercial hub albeit in casual attire. Big French influence in the modern building styles too.

The marina is very modern – under pontoon electric cabling – and spacious.  Also has a huge entry sill that dries to 4m!! 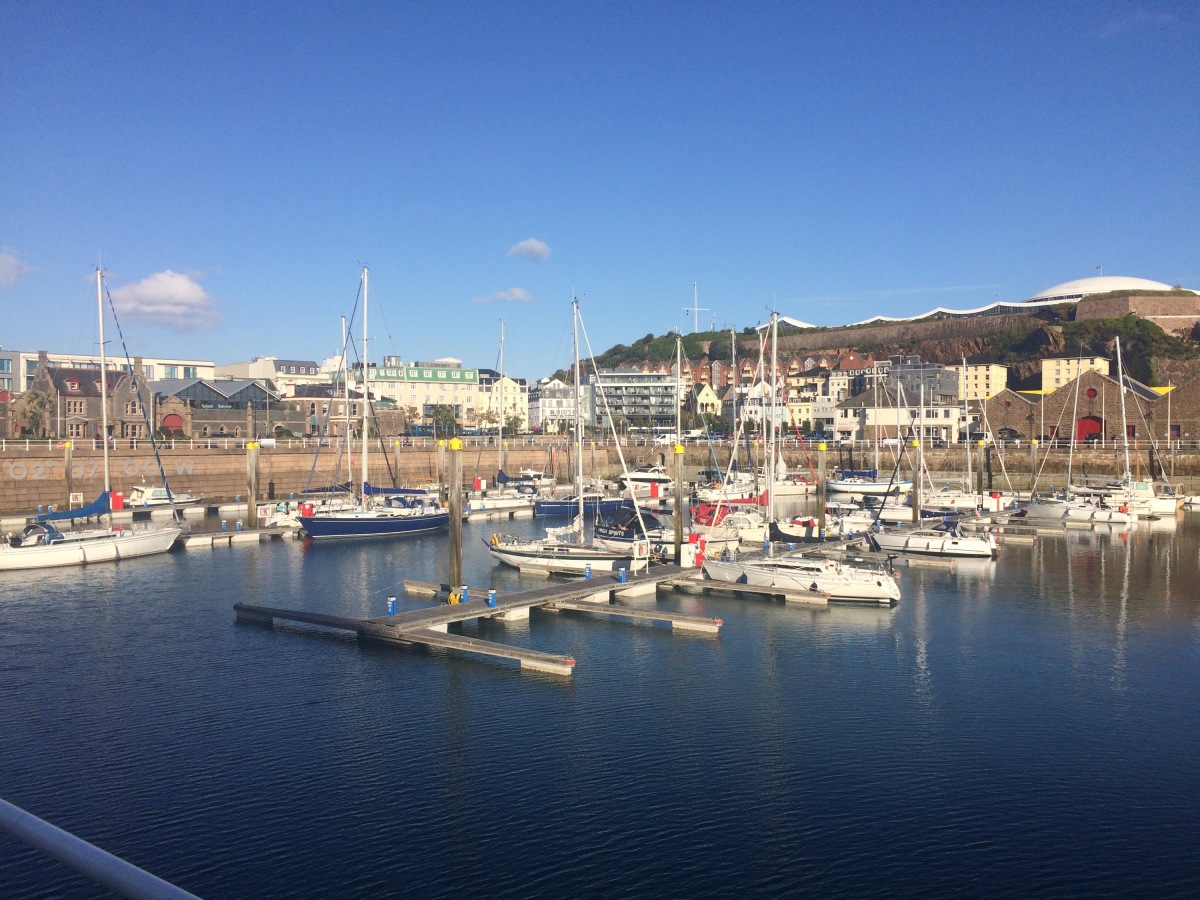 A big fort guards the entrance

Only a couple days sailing left now as we return to the mainland over the rest of the week, and to normal life, reality and responsibility.  Wonder what that’s like?😳 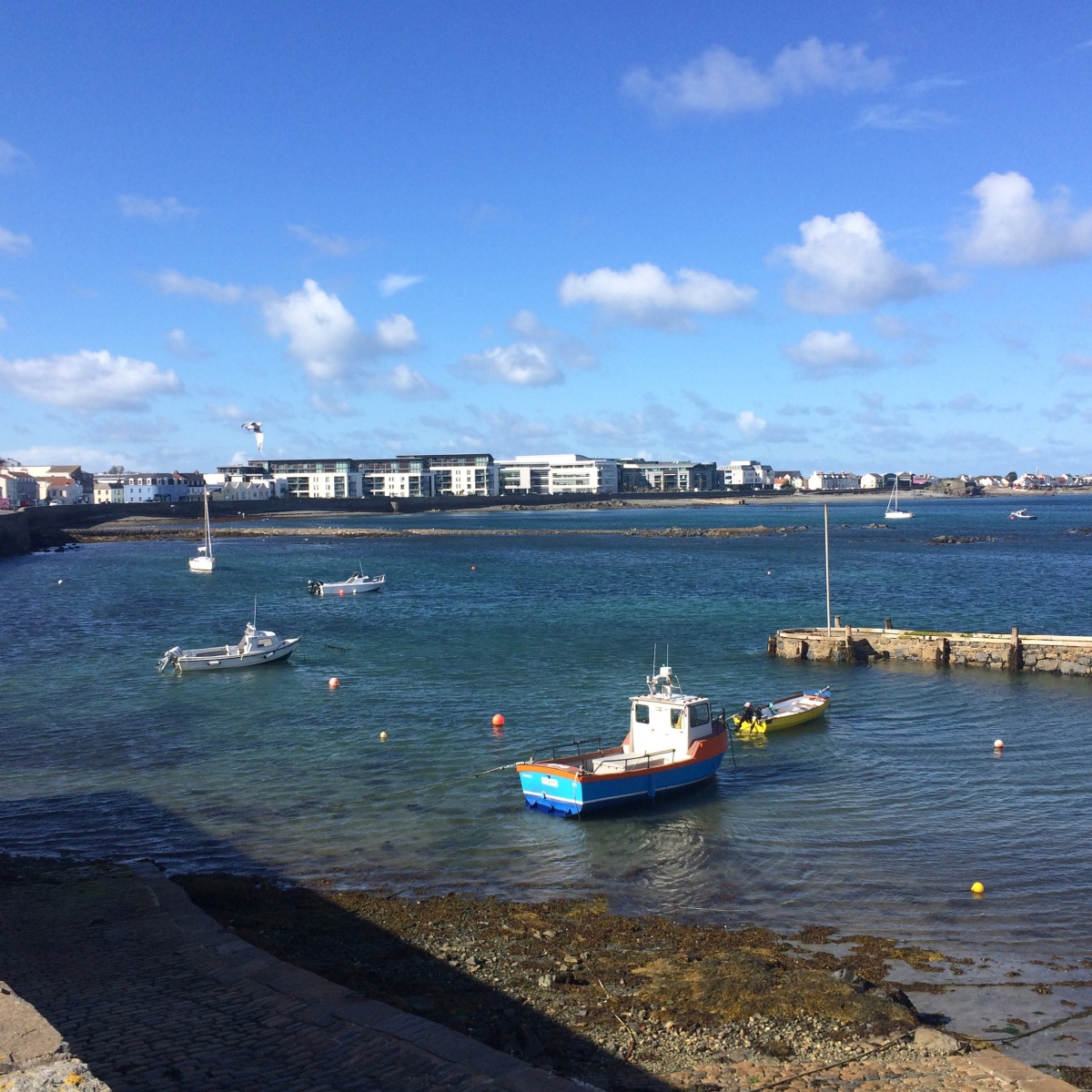 First up, Costa coffee with Barrie – who is raising funds for prostate cancer research on this trip, see justgiving.com under Barrie Crofts – before a few hours theory with Phil focusing on anchoring and IRPCS. 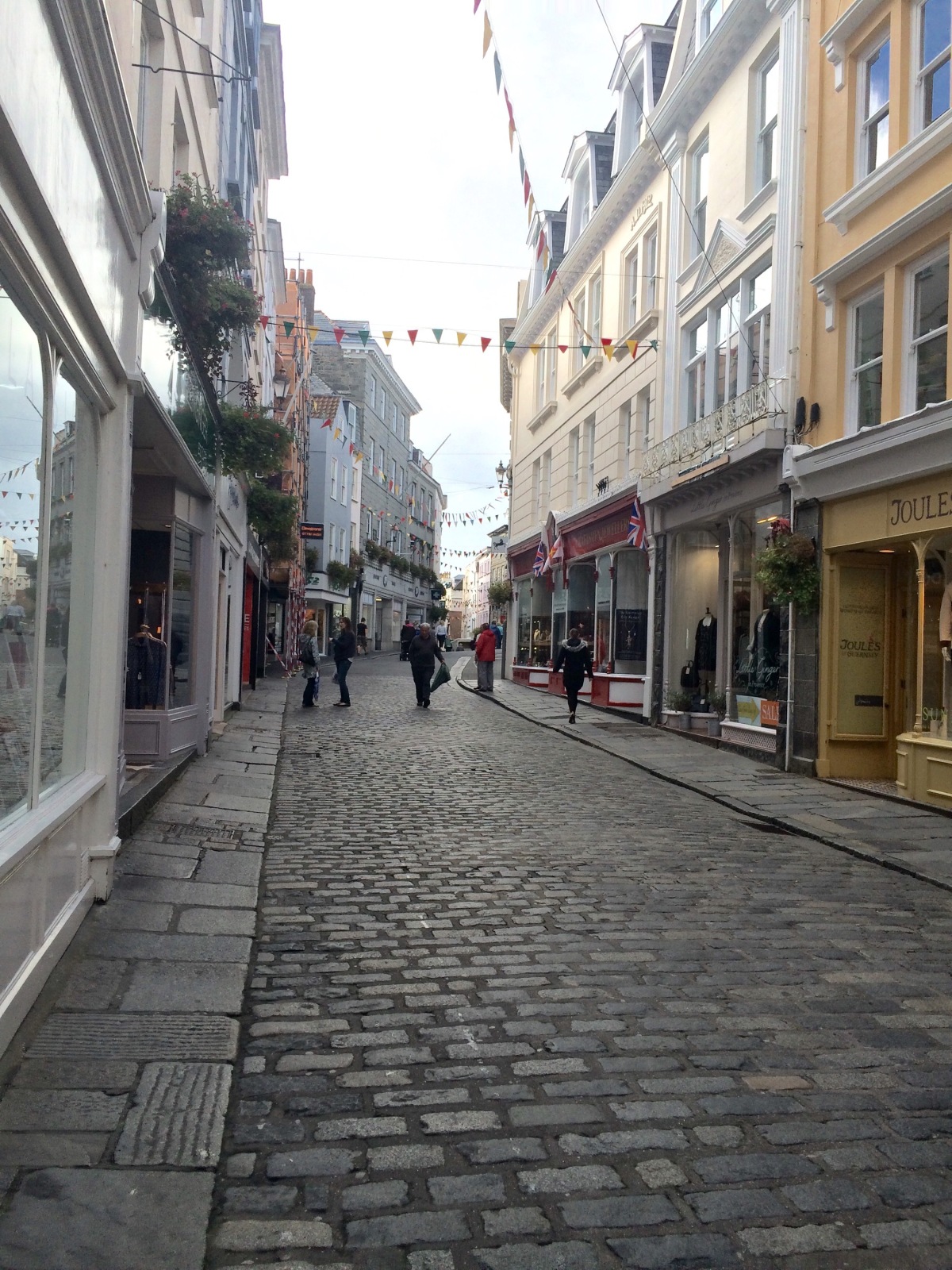 An interesting mix of French and English styles with a bit of history. Old water pumps in the street, a 1920’s preserved shop (including a Keillors mini-franchise type thing!) with beams used from a 1690 ship and lots of liberation memoria from WW2. 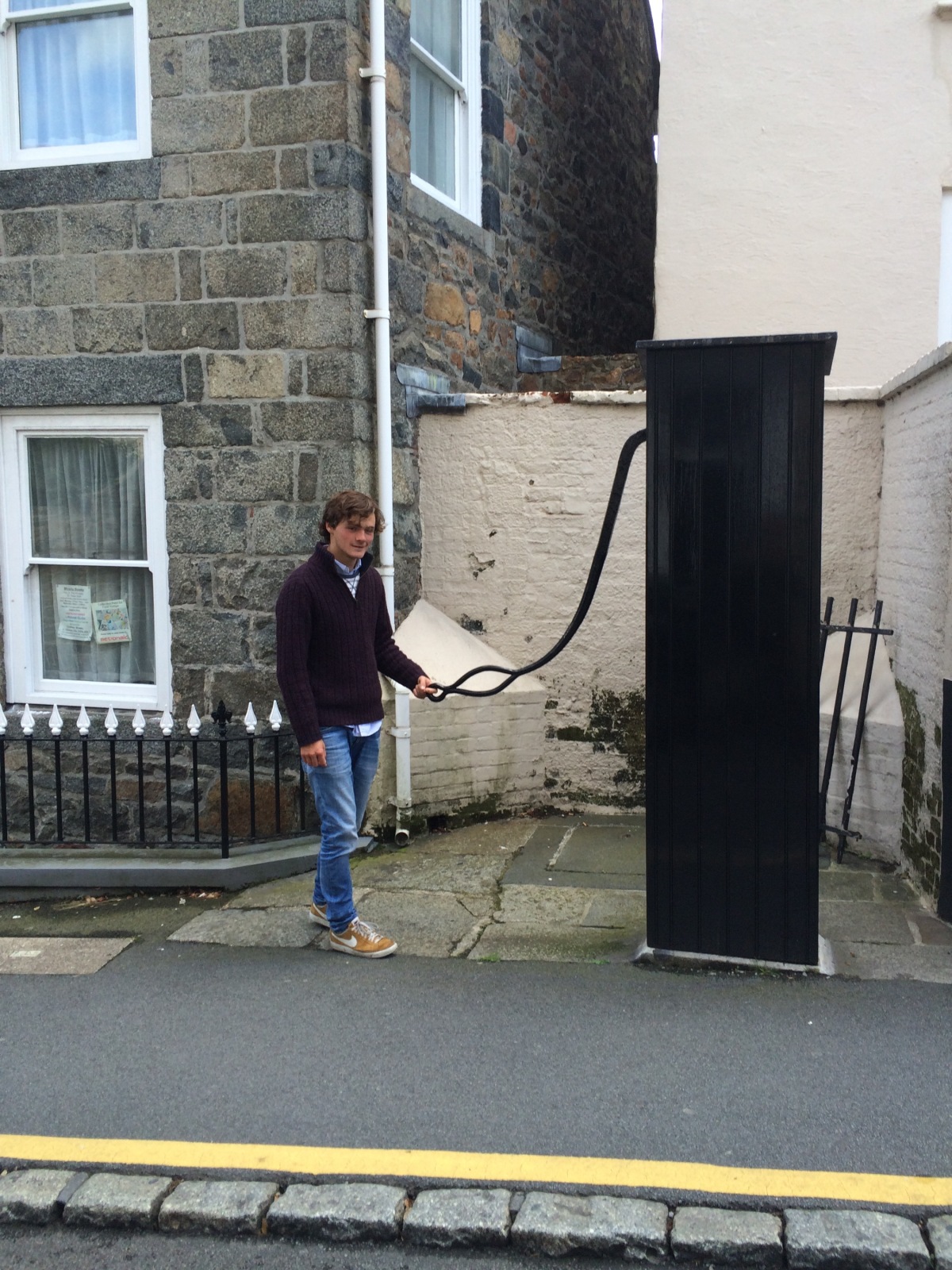 Then tea and cake – well, it keeps us off the ale. 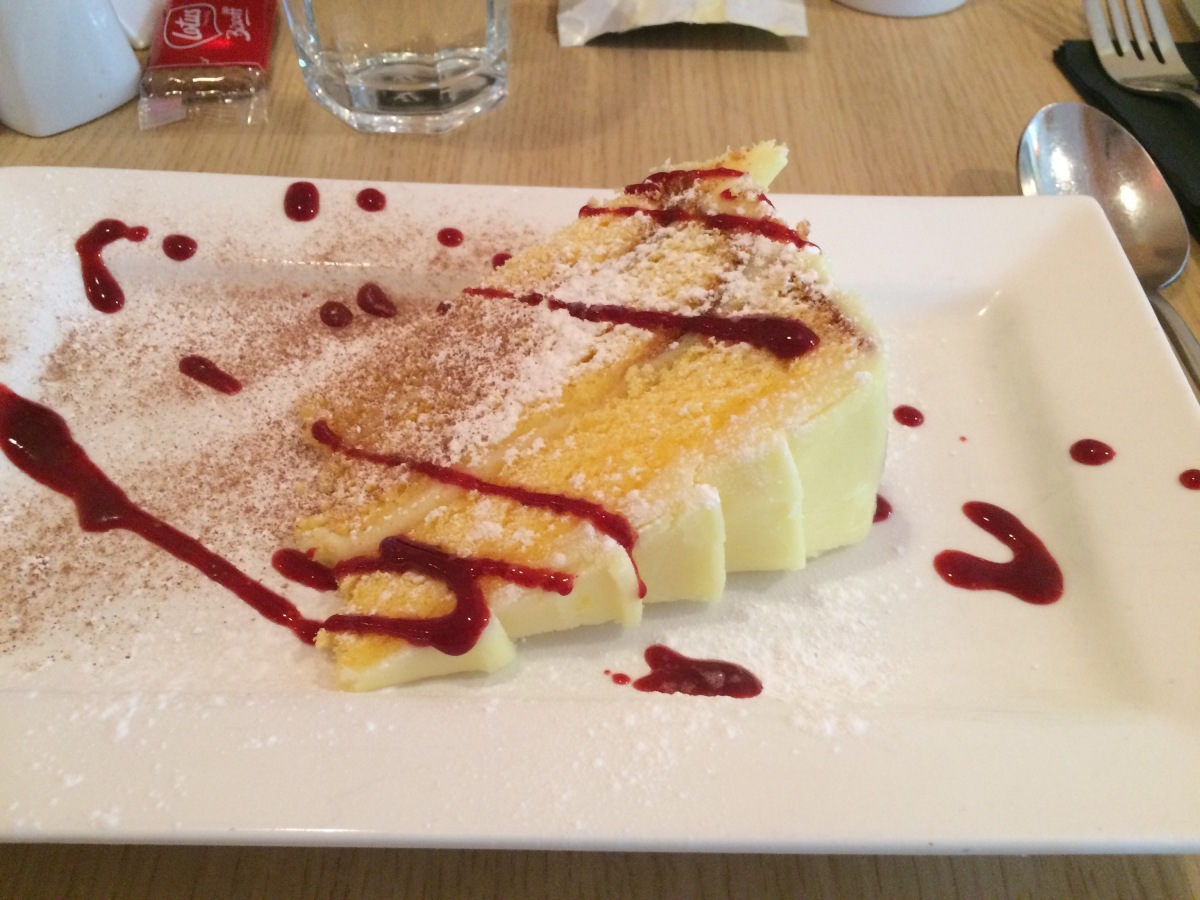 Up earlyish to leave sleepy Alderney.

Morning fun as we shoot the famous Alderney Races, a channel of strong tides that give us a 5 knot  push southward to Jersey. However weather closed in and winds were 100% against us so rather than beat our way to St Helier for 6 more hours we diverted to Guernsey. So much for Channel Islands sunshine as we passed the Barclay brothers’ private estate

However an hour later we were bathed in sunshine at St Peter Port  so CI must definitely be British!

Dined out at a quirky Italian on the esplanade, Da Bruno, run by an eccentric older couple (including the aforementioned Bruno).  VERY highly recommended – fabby grilled sardines followed by a crispy Piccante pizza.  Washed down by lots of vino de la casa. Of course.

Another empties photo for you. 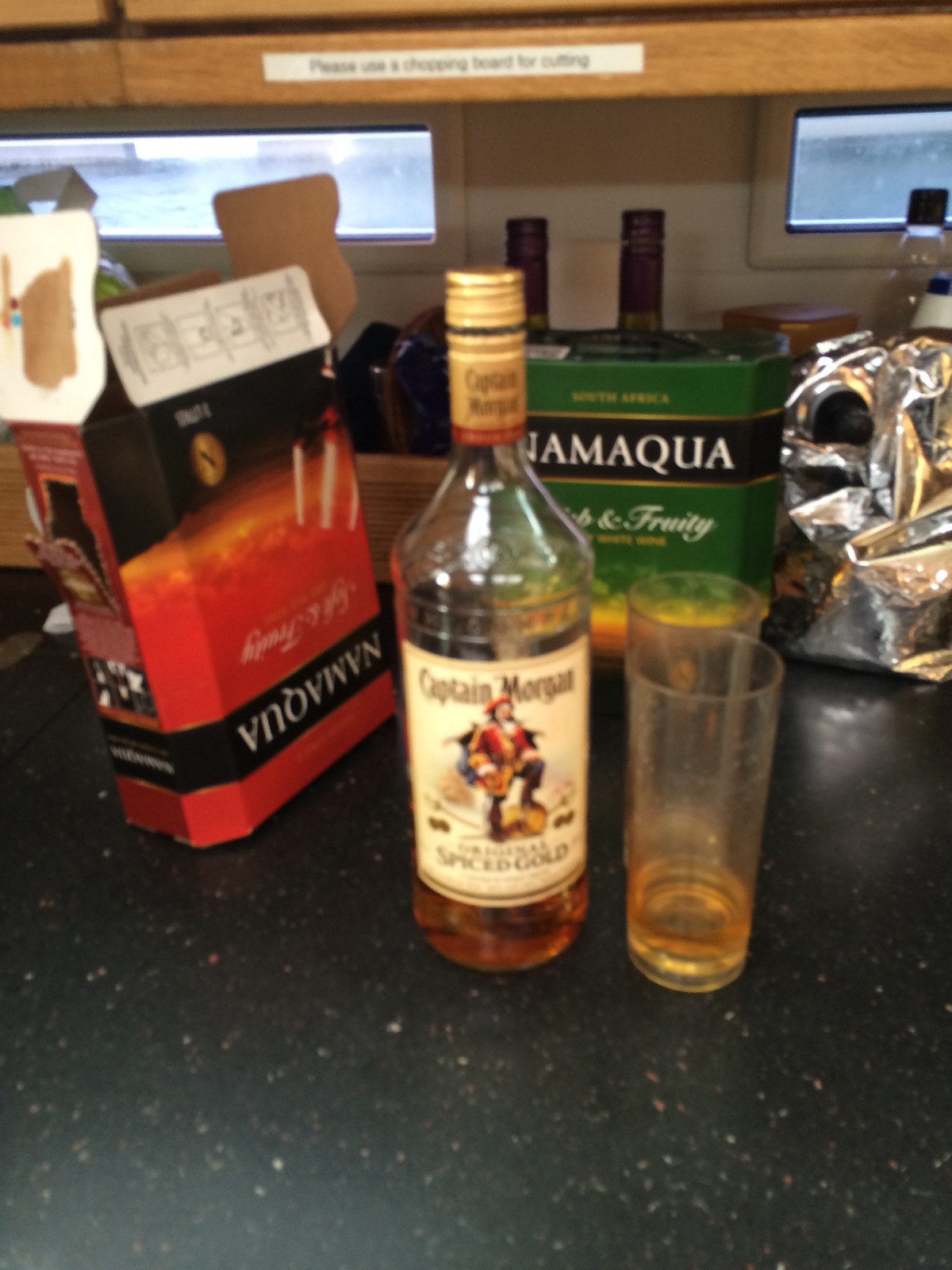 I’ll be glad that the booze cruise finishes soon😥

Skip for the day once again. However, delegated exit and first 6 miles to Rob for more Day Skipper experience. Needless to say, little (big!) bugger creamed it!! Lovely harbour and glorious sunrise 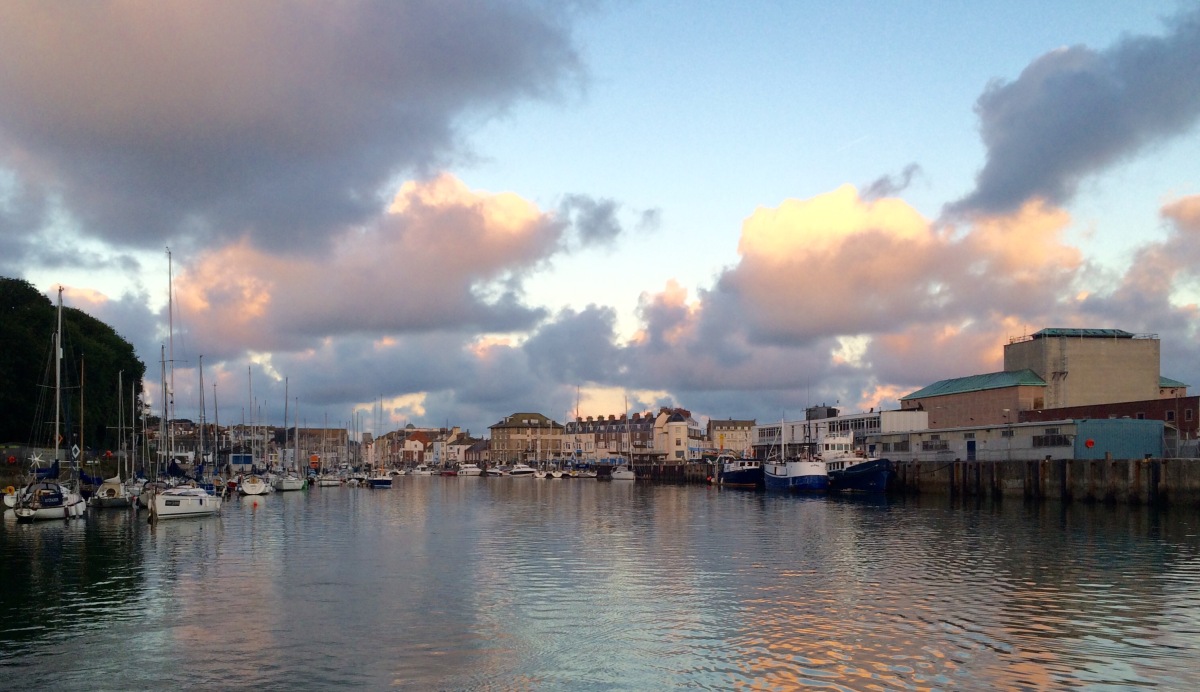 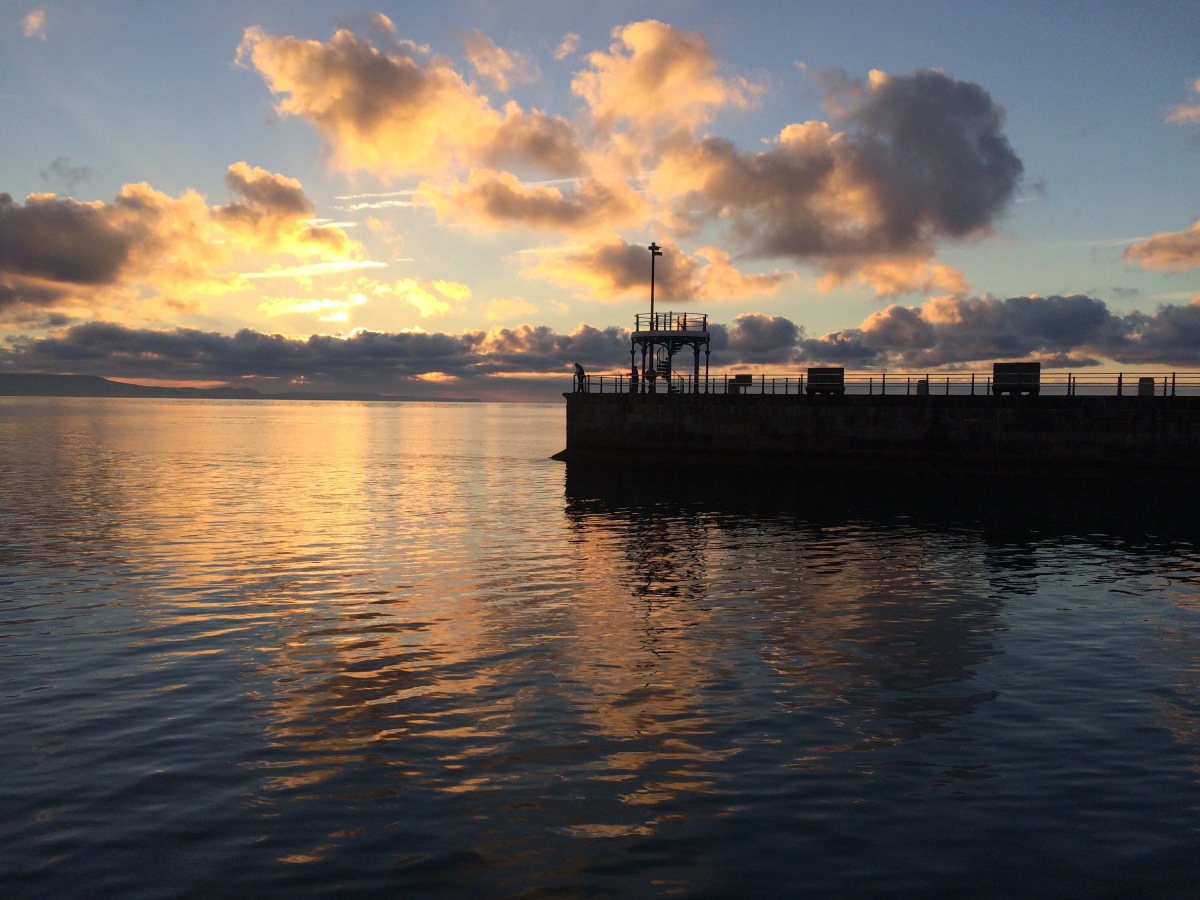 Plus went past magnificent 3 master berthed at quai. 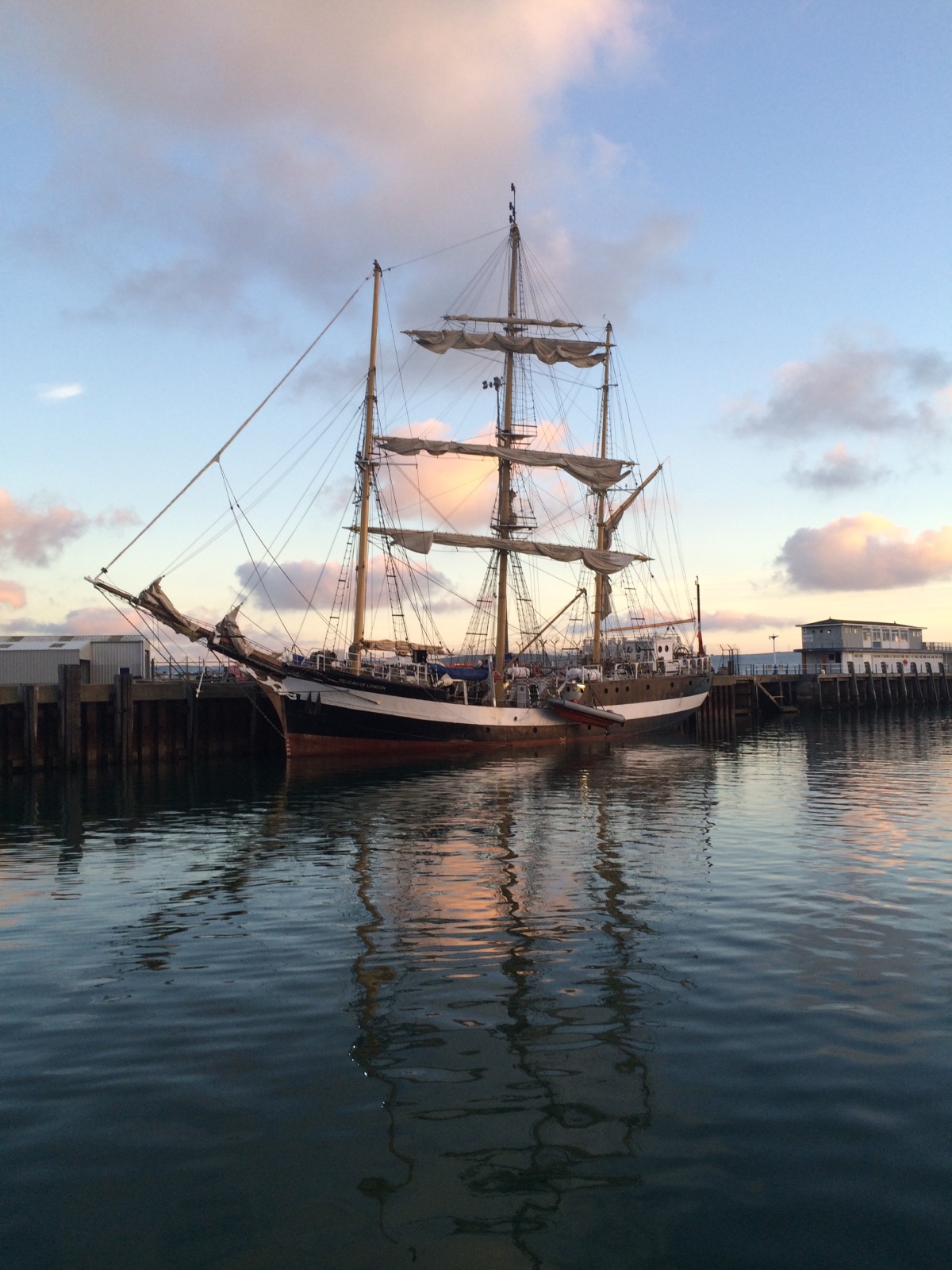 Windless sail to Alderney but we had a little visitor 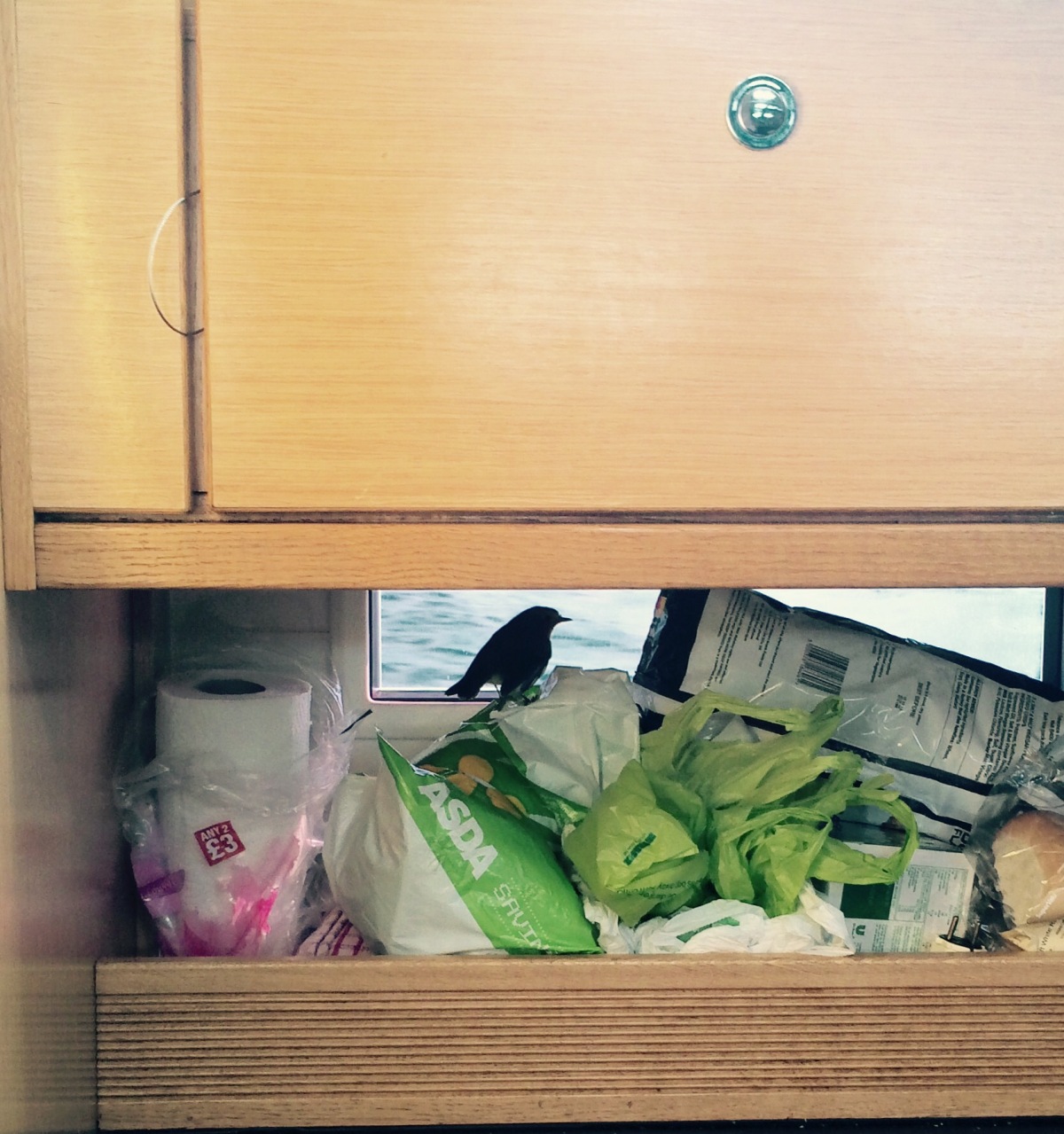 Before retiring to a local hostelry

Another sharp start at dawn under the skipperage of Rob. 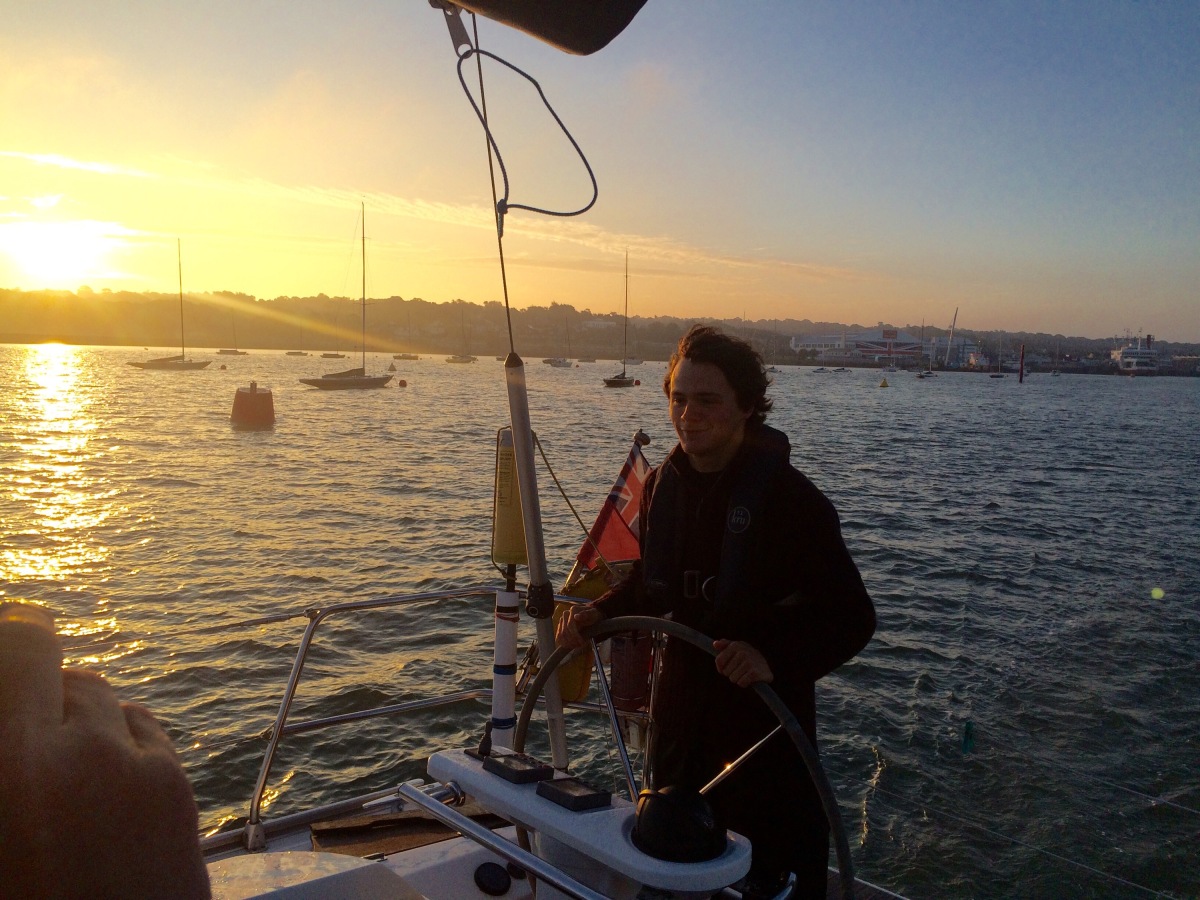 No wind but a beautiful morning. 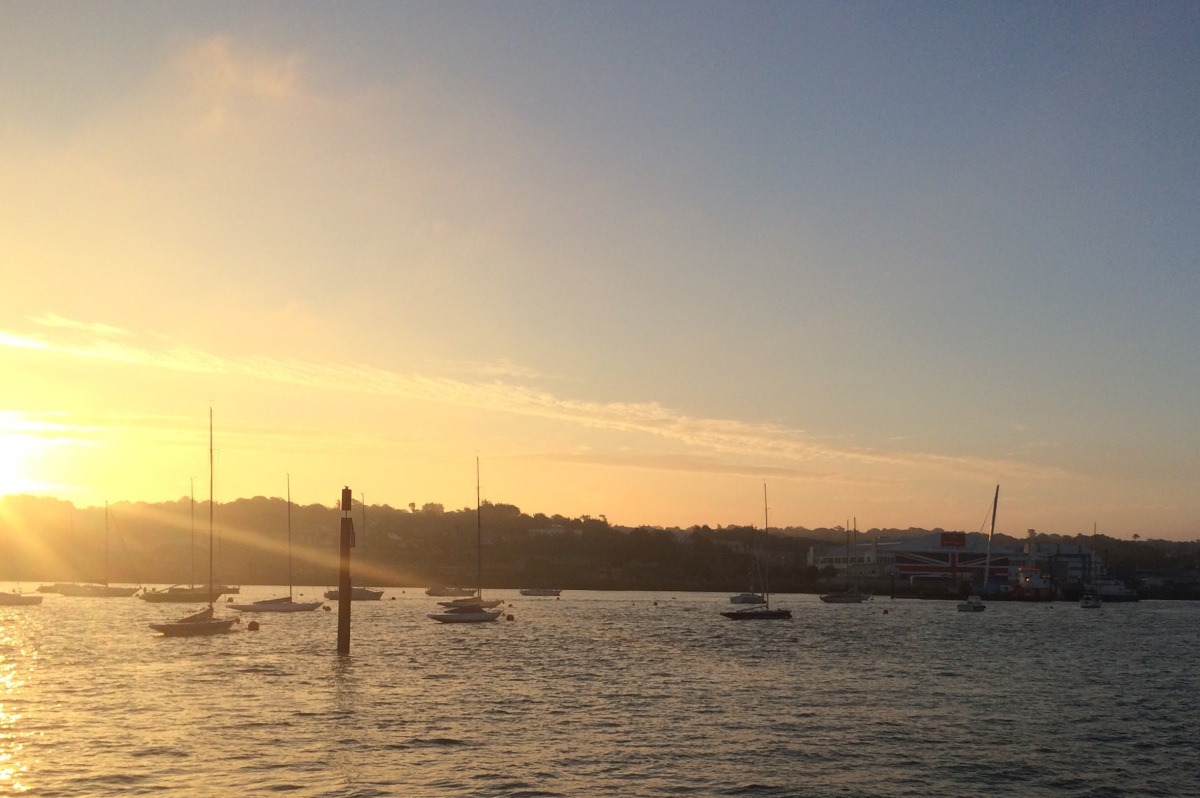 We went past an old prisoner of war camp where in World War Two Polish prisoners were held, and past the famous Needles at the Isle of Wigh. 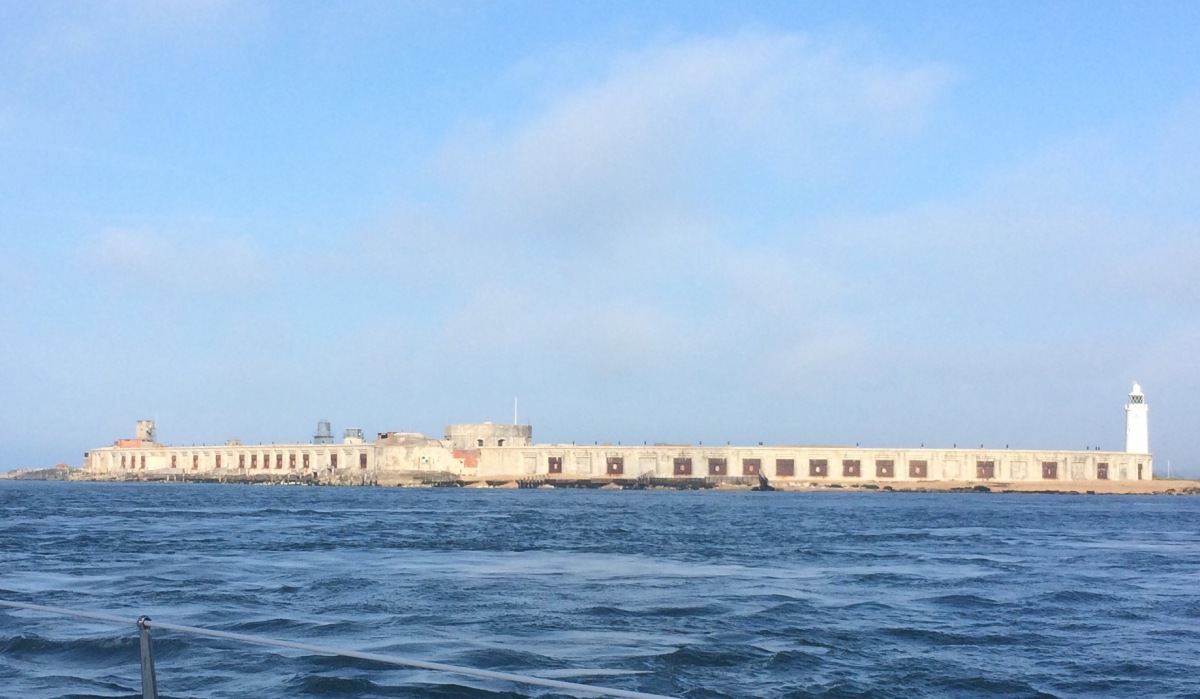 Then a long passage past Dorset’s Jurassic Coast to Weymouth. 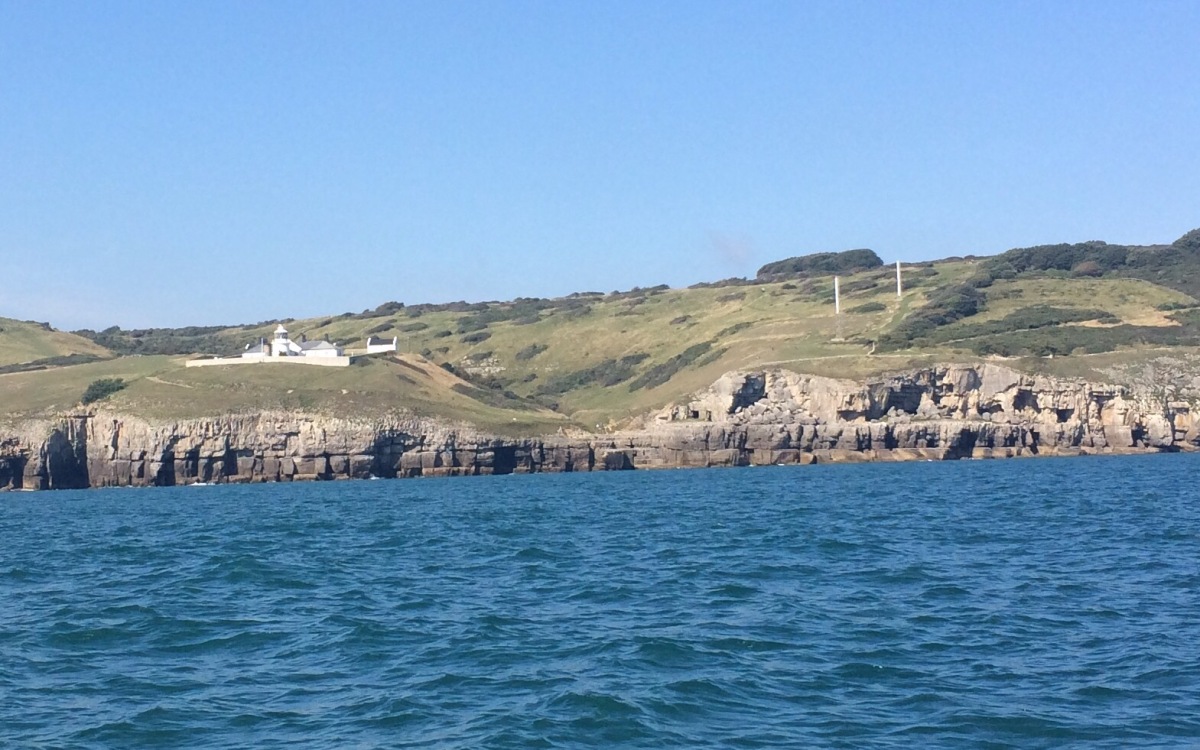 Weymouth is a cute little town very sailing orientated with a lot of fishing and pleasure boats. Also a lot of pubs😜

ps. If I’m not answering email, it’s because Apple have had an upgrade!!👿😬